Where the Tweed welcomes you to Scotland

Coldstream truly is a unique Border town, with the Tweed forming a natural boundary between Scotland and England; is there a more beautiful border?

Our stunning location set above the famous horseshoe of the River Tweed commands spectacular views south towards the Cheviot Hills. And within walking distance of our park, from its elevated position above the Tweed, Coldstream is a bustling little town that is lined with traditional shops, eateries, pubs and galleries where you will be assured of a warm Scottish welcome. Awarded 4 stars by the Scottish Tourist Board in July 2022. 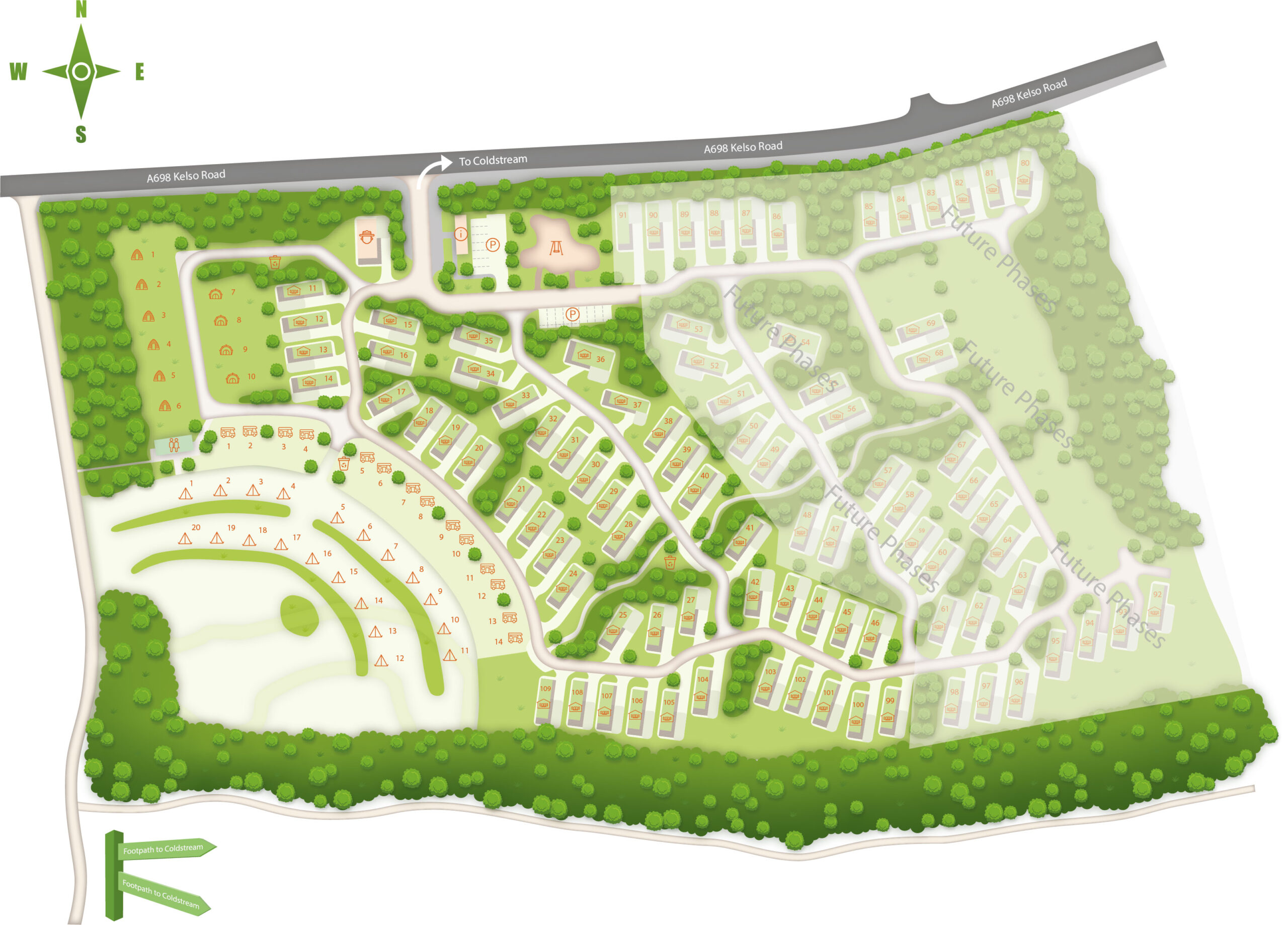 “At the leisure end of town just a short walk from the Hirsel Museum, Craft Centre and Golf club” 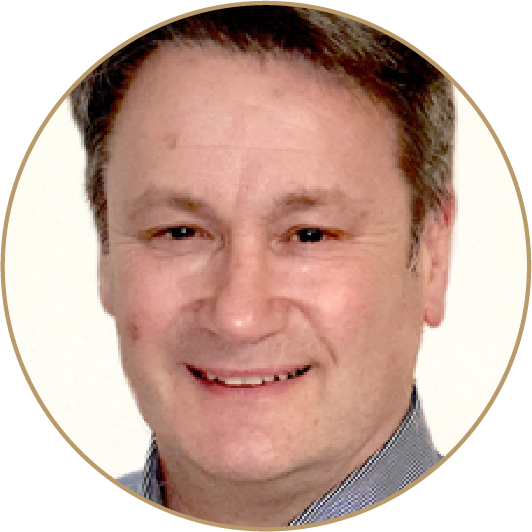 As owner of Coldstream Holiday Park, the most important part of my job is to make sure that everything runs as smoothly as possible and to ensure that all of our guests have a wonderful experience every time they come to stay with us. Of course, this wouldn’t be possible without the help of our incredibly hard-working team.

As someone who has run our sister site Blackadder Park in Greenlaw for the past 25 years, I like to think that I am pretty hands on and approachable. Do feel free to contact me if you have any questions, requests or suggestions and I look forward to meeting you in person in our special part of the world very soon.

When I’m not working, Enjoying time in my Caravan, cycling and walking the dog

When I’m not working, walking the dog and riding my horse 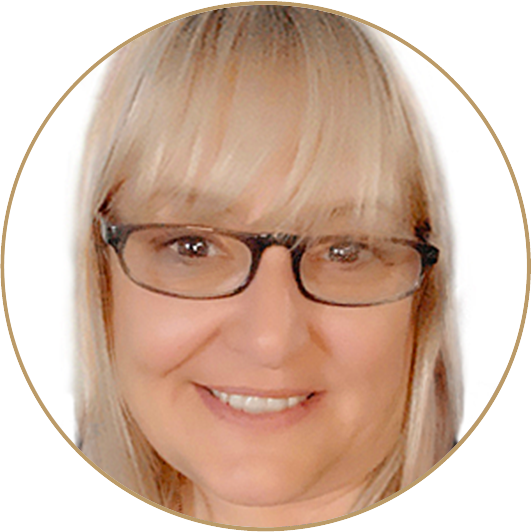 When I'm not working, walking my 2 dogs and going on day trips with family & friends

Our vision of re-establishing a caravan park for Coldstream finally became a reality last year. Twenty-three years ago, I realised that one of Scotland’s most iconic towns did not have a Caravan Park.

We were finally able to pursue this vision two years ago and I am absolutely thrilled that Coldstream Holiday Park was given the green light. As experienced Berwickshire operators, who have successfully run Blackadder Holiday Park in Greenlaw for the past 25 years, we were naturally delighted to get the go ahead for a new holiday park for Coldstream.

Our exciting development had the unanimous backing of local councillors, but the decision was a long time in the making. Local councillor Donald Moffat first spoke with me about the benefit of re-establishing a caravan/camping site for Coldstream in 1997.

And the views of local people were sought, resulting in a town action plan which strongly recommended the need to re-establish a park being presented to Scottish Borders Council.  With the kind support of Jill and Colin McGregor of McGregor Farms, a suitable site was identified two years ago.

We are working with Historic Environment Scotland to evaluate, preserve and promote a semi circular crop marked feature likely to be an iron age settlement “of late-prehistoric or early-historic date”, visible on aerial photographs of the site. This is scheduled as a prehistoric domestic and defensive settlement by HES, of national importance. To create an asset for Coldstream, in a unique and positive way: “The association with the Regiment, its heritage and culture, places Coldstream as a world famous Flagship town for Scotland.”

We look forward to building a vibrant 21st century business which will encourage many, many visitors to visit and return to this lovely and unique Border town.

Our touring Caravan, Static Caravan, Glamping and Camping Pitches are laid so as to reduce the visual impact and orientated to fit the natural slope of the site. This creates a highly attractive parkland setting within a high quality location, near to the River Tweed, the Hirsel Garden and designed landscape. This was borne from a landscape and visual appraisal, tailored around the general principles of a master plan, so as to provide a high quality development that ‘fits’ into the local townscape and respects the landscape setting.

With layers of woodland, structural, specimen tree and shrub planting: Our landscape framework creates pockets of pitches allowing caravans and tents to be readily absorbed and linked through a thoughtfully screened range of formal and informal open spaces.

In addition to general grassland there will be amenity grassland and areas managed as wildflower grassland around the scheduled ancient monument.

Ecology surveys have been carried out by an Ecologist, with over 30 years professional experience in researching, assessing & evaluating Scottish ecological data.

Desk-top data collation & field surveys have been carried out consisting of a habitat survey of European and UK protected species. This included a daytime roost risk assessment for bats and incidental wildlife recording e.g. birds and invasive non-native species. Any required buffers for otter, water vole and badgers etc. will be catered for.

“We appreciate the value of the park for wildlife and follow environmental legislation and approved codes of practice. Consider the environmental impact of all current and likely future operations. Monitor and control pollution and waste produced and the consumption of all raw materials. Invest in training in environmental matters.” 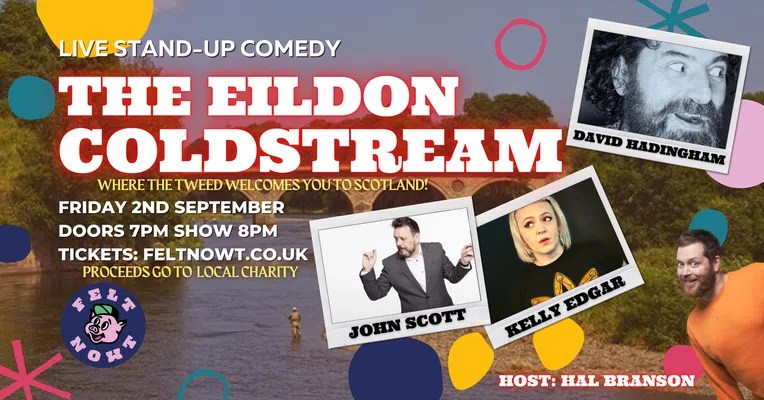 Live Stand-Up Comedy @ the Eildon, Coldstream. Join us for a night of laughs with Felt Nowt a revolutionary comedy…

We have just received our first Quality Assurance Award from the Scottish Tourist Board. We are delighted to have attained…

Our online booking system and holiday home sales stock is a fast and secure way to get in touch.

If you would prefer, we are here to help online or by phone

Book with confidence knowing that you can cancel, move or put your plans on hold with our Coronavirus booking guarantee if:

Our park has to close

You, or one of your party are told to self isolate or have any Covid–19 symptoms

Making your first holiday since lockdown safe and relaxing

We use cookies on our website to give you the most relevant experience by remembering your preferences and repeat visits. By clicking “Accept All”, you consent to the use of cookies.
Cookie SettingsAccept All
Manage consent

This website uses cookies to improve your experience while you navigate through the website. Out of these, the cookies that are categorized as necessary are stored on your browser as they are essential for the working of basic functionalities of the website. We also use third-party cookies that help us analyze and understand how you use this website. These cookies will be stored in your browser only with your consent. You also have the option to opt-out of these cookies. But opting out of some of these cookies may affect your browsing experience.
Necessary Always Enabled
Necessary cookies are absolutely essential for the website to function properly. These cookies ensure basic functionalities and security features of the website, anonymously.
Functional
Functional cookies help to perform certain functionalities like sharing the content of the website on social media platforms, collect feedbacks, and other third-party features.
Performance
Performance cookies are used to understand and analyze the key performance indexes of the website which helps in delivering a better user experience for the visitors.
Analytics
Analytical cookies are used to understand how visitors interact with the website. These cookies help provide information on metrics the number of visitors, bounce rate, traffic source, etc.
Advertisement
Advertisement cookies are used to provide visitors with relevant ads and marketing campaigns. These cookies track visitors across websites and collect information to provide customized ads.
Others
Other uncategorized cookies are those that are being analyzed and have not been classified into a category as yet.
SAVE & ACCEPT